Community Photovoltaic features can be added to the GeoJSON Feature File as a district system of type “Community Photovoltaic”. View the district system schema for more details. The REopt™ scenario optimization post-processor will use this information in its PV capacity calculations when run with the multi-PV assumptions file. A gcr field representing the ground coverage ratio, or the percentage of the building’s available roof area that will be covered by PV, can be specified in the REopt assumptions file, and is defaulted to 0.99. PV generation results can be found in the scenario_optimization output files in the scenario directory.

Ground Mount Photovoltaic features can also be added to the GeoJSON Feature File as a district system feature of type “Ground Mount Photovoltaic”. A ground mount PV feature should have an associated_building_id element specified, with the ID of a building feature in the Feature File. Grount Mount photovoltaic systems are assumed to be “behind the meter” of the utility meter for the associated building feature. View the district system schema for more details.

Alternatively, ground mount photovoltaics can be considered in the REopt feature optimization without defining district system features and associating them with a building in the GeoJSON file. If no features are defined in the GeoJSON file, REopt return the optimal amount of ground mount PV with an upper limit of area equivalent to the total site area for each feature that was run with an assumptions file that contained a PV definition with location = ground. More realistically, there will be a more specific area limitation based on the area available for Ground Mount PV associated with the Feature and, therefore, district systems should be defined in the GeoJSON files for those building features where ground mount PV is considered. An additional refinement would be to specify different assumptions files for features with ground mount PV and those without. Feature-by-feature assumptions file assignment is done in the scenario CSV file for a particular reopt-enabled scenario.

Rooftop photovoltaics can be optimized through the REopt post-processors. The default base and multi-PV assumptions files can be used for the feature optimization and scenario optimization post-processors. A gcr field representing the ground coverage ratio, or the percentage of the building’s available roof area that will be covered by PV, can be specified in the REopt assumptions file, and is defaulted to 0.99. The building’s available roof area is automatically calculated by the default URBANopt post-processor. Ground Mount and Rooftop photovoltaics can be explored simultaneously by using the multi-PV assumptions file.

Use the following CLI command to create a PV-enabled example project:

Once you have a project directory, you will want to create the Scenario CSV and enable REopt functionality:

The command above creates a reopt directory within the project directory as well as a REopt enabled Scenario CSV. This directory contains two example assumptions file:

Feel free to modify these files directly in your project, or create new files. A complete list of input fields—including type, description, and acceptable range—can be retrieved from the REopt API by entering the following URL in your browser:

The method of specifying which assumption file to use in an optimization depends on the type of REopt optimization:

Through CLI commands, the assumptions files will be updated with basic information from your project’s Feature and Scenario Reports (i.e. latitude, longitude, electric load profile) and submitted to the REopt API. Visit the Getting Started page for more information on creating and running an example PV project.

The results from the scenario and feature level optimization can also be visualized using the instructions provided in the “Plot Results” section of the Getting Started page.

An example visualization of scenario optimization is shown below, showing the breakdown Electricity and Natural Gas consumed and Electricity Produced for the scenario. 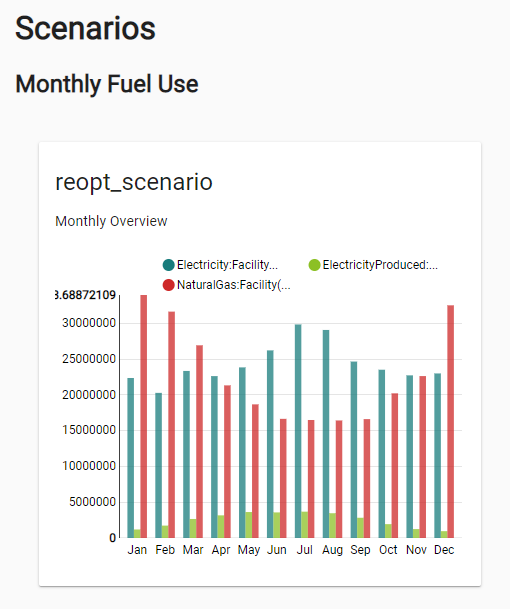