The DES workflow has python and Modelica dependencies that must be installed in addition to the URBANopt CLI dependencies prior to use. Visit the DES Installation page to install the dependencies.

There are three major steps to running the DES workflow:

Refer to the Getting Started page to view examples of how to use the DES workflow with the URBANopt CLI.

District energy systems have been leveraged for hundreds of years to move energy (typically waste heat from industrial processes) to effectively maintain comfort in neighboring buildings; however, modeling the potential and effectiveness of these systems has been a challenge due to complexity. The URBANopt DES workflow aims to make DES analysis more approachable in hopes of encouraging adoption through better evaluation of new systems or expansions of in situ systems. The URBANopt DES workflow leverages a tool called the GeoJSON to Modelica Translator (GMT) to enable the analysis of DES systems.

The GeoJSON Modelica Translator (GMT) is a one-way trip from GeoJSON in combination with a well-defined instance of the system parameters schema to a Modelica package with multiple buildings loads, energy transfer stations, distribution networks, and central plants. The project will eventually allow multiple paths to build up different district heating and cooling system topologies; however, the initial implementation is limited to 1GDH and 4GDHC.

The project is motivated by the need to easily evaluate district energy systems. The goal is to eventually cover the various generations of heating and cooling systems as shown in the figure below. The need to move towards 5GDHC systems results in higher efficiencies and greater access to additional waste-heat sources. 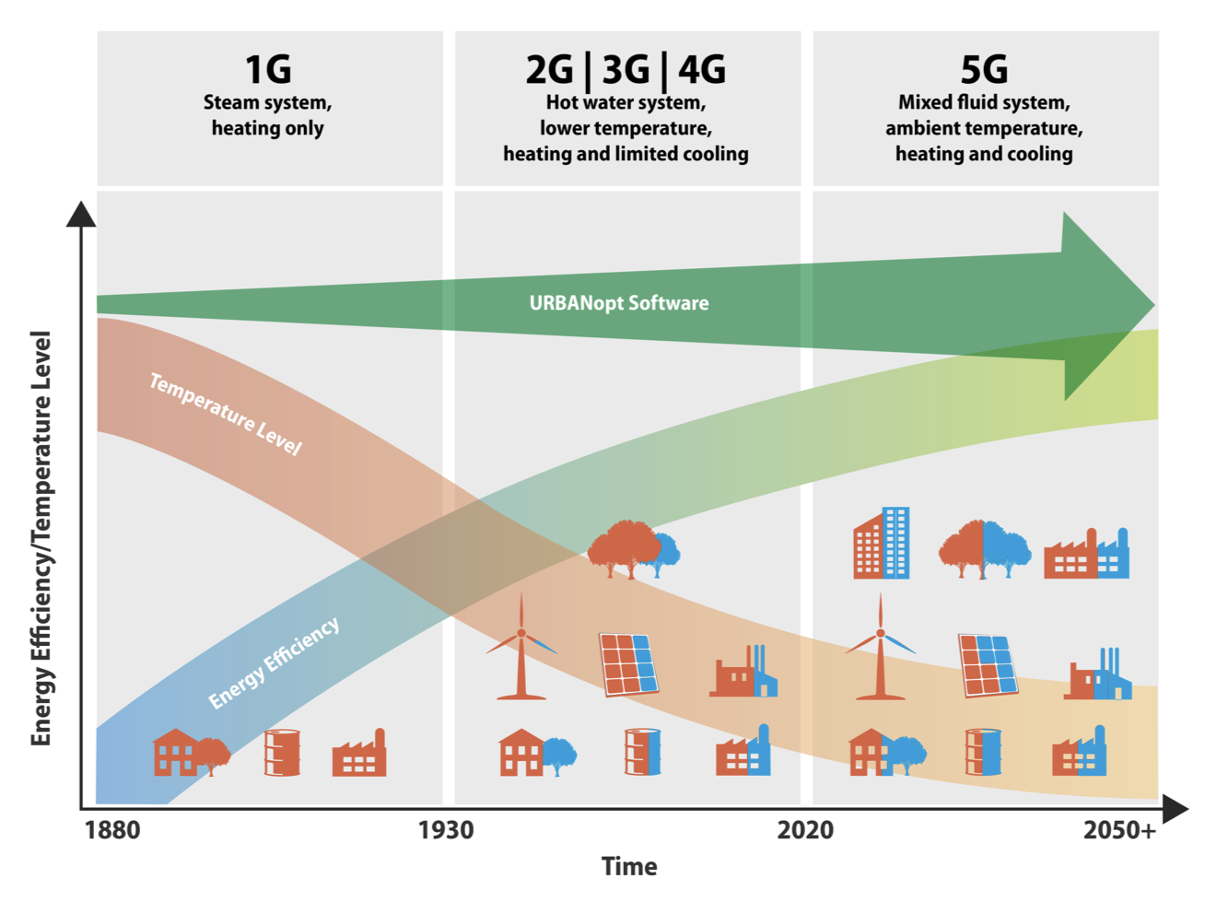 The diagram below is meant to illustrate the future proposed interconnectivity and functionality of the GMT project. 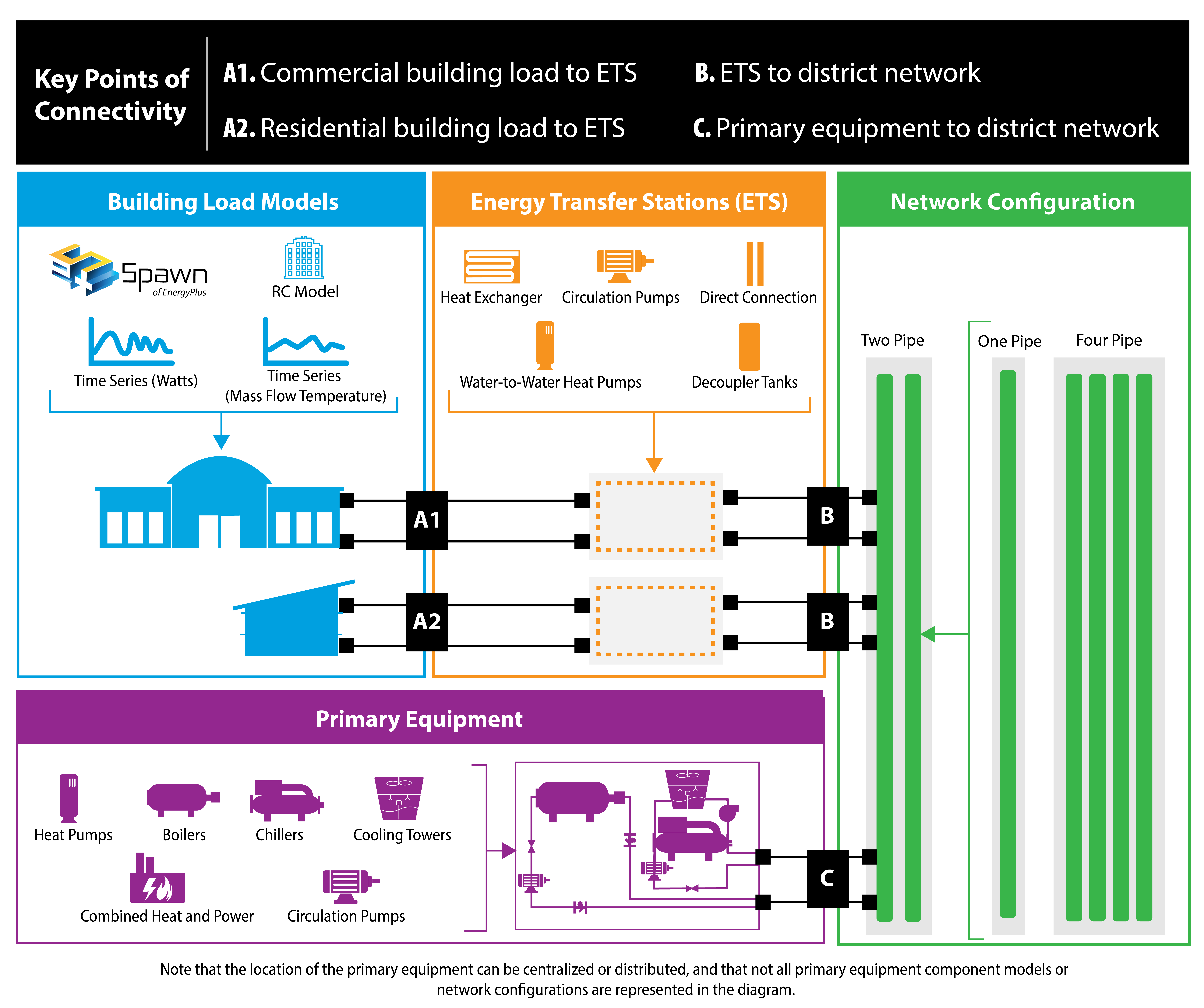 As shown in the image, there are multiple building loads that can be deployed with the GMT and are described in the Building Load Models section below. These models, and the associated design parameters, are required to create a fully runnable Modelica model. The GMT leverages two file formats for generating the Modelica project: 1) the GeoJSON feature file and 2) a System Parameter JSON file.

The GMT is designed to enable “easy” swapping of building loads, district systems, and newtork topologies. Some of these functionalities are more developed than others, for instance swapping building loads between Spawn and RC models (using TEASER) is fleshed out; however, swapping between a first and fifth generation heating system has yet to be fully implemented.

The GeoJSON model should include checks for ensuring the accuracy of the area calculations, non-overlapping building areas and coordinates, and various others.

The Model Connectors are libraries that are used to connect between the data that exist in the GeoJSON with a model-based engine for calculating loads (and potentially energy consumption). Examples includes, TEASER, Data-Driven Model (DDM), CSV, Spawn, etc.

The Simulation Mapper Class can operate at mulitple levels:

In some cases, the Level 3 case (translation to Modelica) is a blackbox method (e.g. TEASER) which prevents a simulation mapper class from existing at that level.

It is possible to test the GeoJSON to Modelica Translator (GMT) by simpling installing the Python package and running the command line interface (CLI) with results from and URBANopt SDK set of results. However, to fully leverage the functionality of this package (e.g., running simulations), then you must also install the Modelica Buildings library (MBL) and Docker. Instructions for installing and configuring the MBL and Docker are available on the DES Installation page.

To simply scaffold out a Modelica package that can be inspected in a Modelica environment (e.g., Dymola) then run the following code below up to the point of run-model. The example generates a complete 4th Generation District Heating and Cooling (4GDHC) system with time series loads that were generated from the URBANopt SDK using OpenStudio/EnergyPlus simulations.

More example projects are available in an accompanying example repository.

Visit the developer resources page if you are interested in contributing to the GMT project.