Daytime use of district HVAC system that is predominantly commercial. 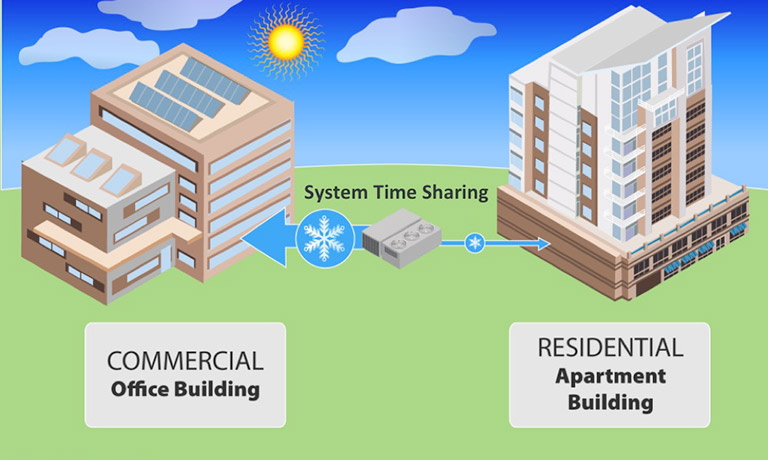 Night time use of district HVAC system that is predominantly residential. 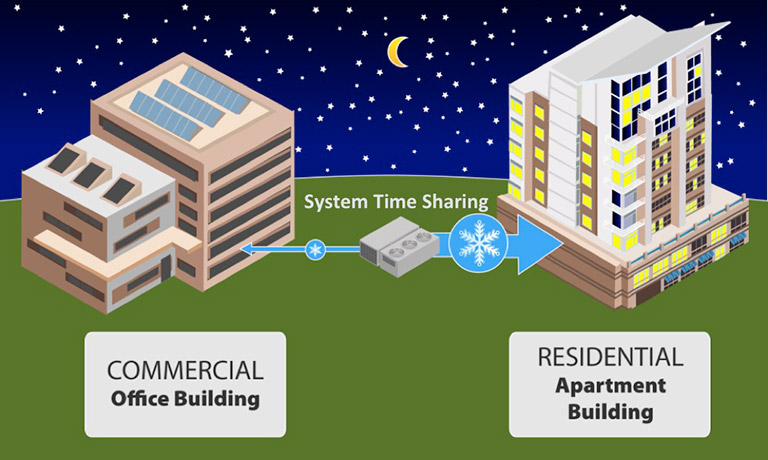 URBANopt leverages intelligent defaults and templates in OpenStudio Standards to quickly generate reasonable building energy models at conceptual design stages when important design decisions are made. At later stages of design, URBANopt can incorporate detailed single building models developed in tools such as OpenStudio if they are available. At the city, regional, and national scales, building stock modeling tools, such as ComStock and ResStock, can be used to model populations of buildings. While building stock models largely ignore interactions between buildings, URBANopt analyses might be used to develop adjustment factors that can be applied to stock modeling tools to account for them.

Analytical software development kits (SDKs), such as URBANopt, provide software and data libraries which simplify use of the detailed simulation engines. Many of these SDKs and engines, including URBANopt and EnergyPlus, are open-source and focus on underlying calculation methods and workflows. A variety of tool vendors in the private sector develop user interfaces for district-scale energy analysis. These user interfaces make it possible for tool users to interact with the underlying SDKs and engines performing calculations of energy use and other metrics. Tool users at urban master planning firms, energy consultancies, academic research institutions, and other entities operate applications and user interfaces to perform analyses and make recommendations on a variety of decisions that their clients are facing. Their clients include real estate developers, building owners, utilities, district thermal system operators, cities, and others.

The ecosystem depicted in Figure 2 leverages and encourages partnership between public entities and the private sector. 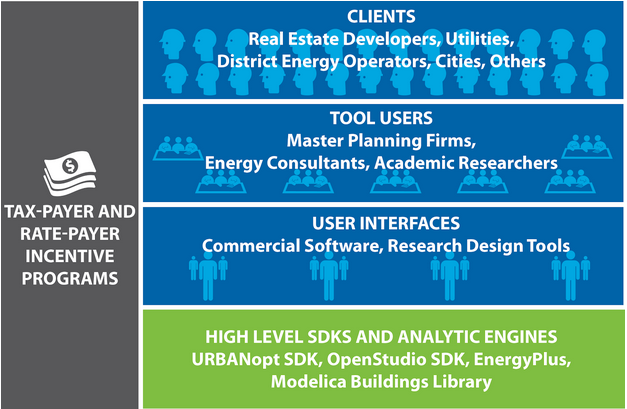 The communities and urban design space is too large for any tool, SDK, or engine to address all of the possible use cases and design decisions of interest. Rather than building a single monolithic piece of software, the URBANopt project is made up of several modules that operate as part of the larger communities and urban design and modeling ecosystem. These modules can be shared across the community and combined as needed by tool vendors to save time and effort. We encourage collaboration with external parties who may want to use URBANopt modules directly, modify URBANopt modules, or build their own modules. To encourage modular reuse and collaboration, URBANopt software development has adopted the following design principles:

URBANopt interfaces with multiple software technologies to provide the integration outlined in the use cases. Figure 3 shows the core URBANopt modules as well as the modules providing grid-interactivity and district energy system capabilities. 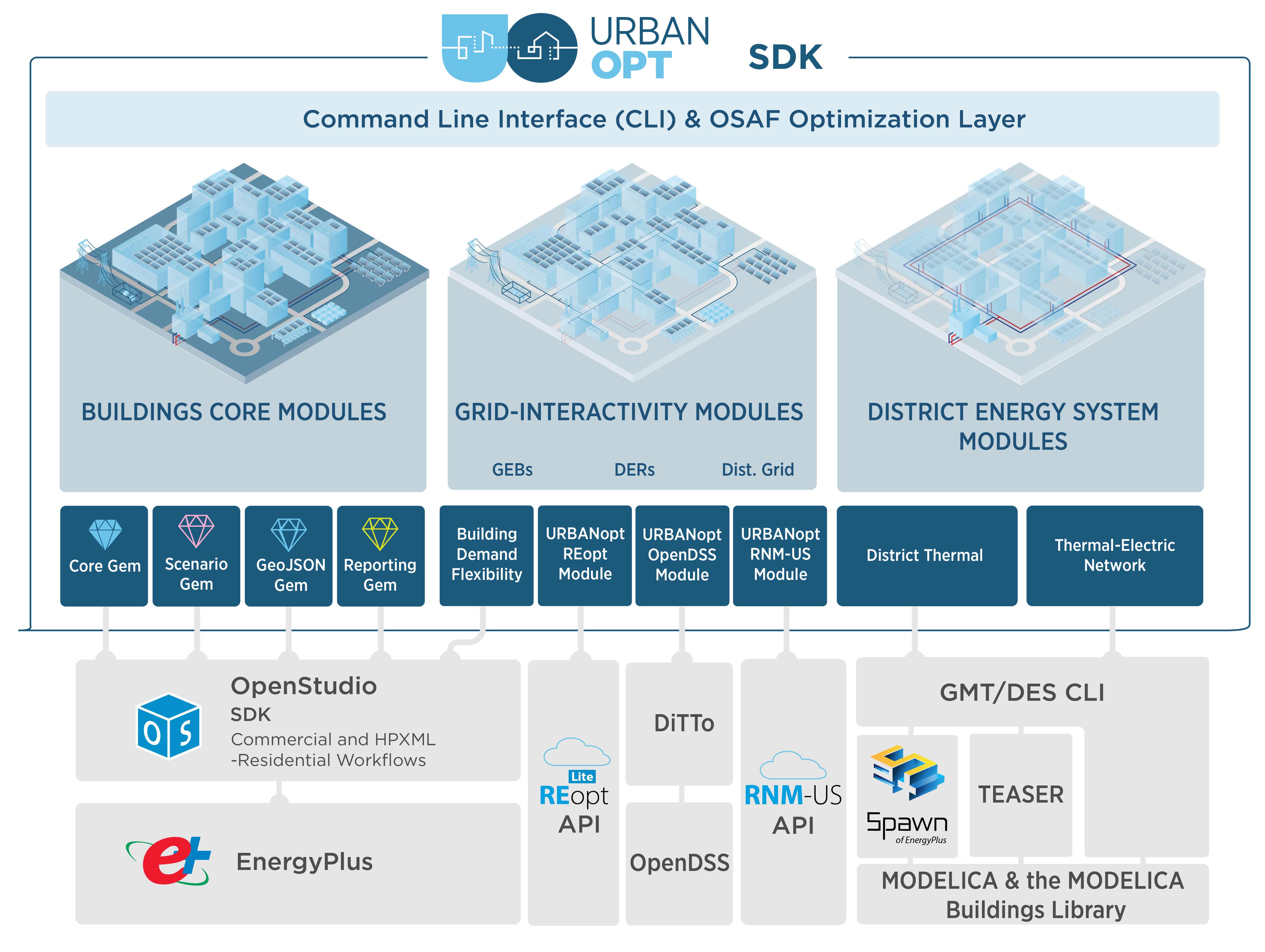 In line with the software design principles outlined above, URBANopt projects are assembled from multiple functional modules. A command line interface (CLI) has been developed to aid users in combining the modules needed to implement a desired workflow. Example projects are also available through the CLI for users to test a particular workflow before adapting it to their particular use case. Because there is so much variability in district-scale energy analysis, the end user may need to customize some of the URBANopt (and other) modules needed to implement the desired workflow for their project. Customization documentation is available for users to consult during their particular project development. 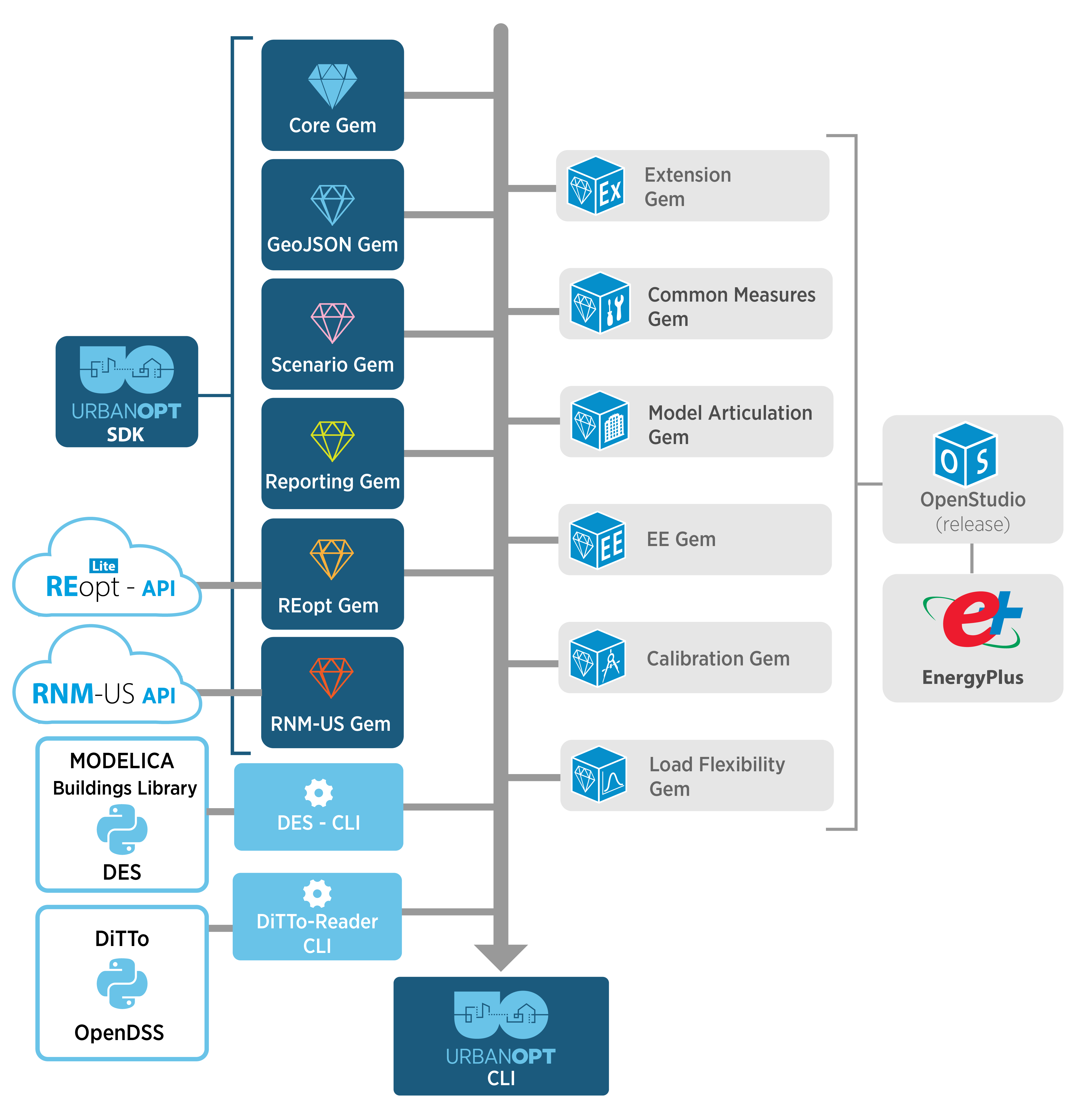 All of the project specific data, including the GeoJSON file with potentially non-public information about the district of interest, is stored in project repository which may be kept private. Project or user specific OpenStudio Measures can also be used. When working on a project, the end user can specify the exact version of each module to use in their project, even overriding the versions of OpenStudio modules included in the OpenStudio release. This allows the project to move quickly or slowly depending on the project’s needs. Finally, third party modules can be leveraged if needed. For example, URBANopt will not initially implement a module to read from CityGML. Figure 3 shows how a CityGML module developed by a third party could be used as an alternative to the URBANopt GeoJSON module if a project desired.

In general, URBANopt modules will be packaged and distributed as Ruby Gems or Python Modules. Functionality that will be used by OpenStudio Measures should be developed in Ruby and packaged as OpenStudio Extension Gems. URBANopt modules distributed as OpenStudio Extension Gems can be executed using OpenStudio Command Line Interface (CLI) to integrate with Python-driven workflows. URBANopt modules will be developed under the URBANopt GitHub organization to encourage collaboration with other organizations that might be hesitant to upload code to the NREL Github organization. Documentation, testing, and continuous integration (CI) will also be developed for these example projects. Users can leverage these example projects as starting points for their individual projects.

Back to main documentation